Organics can benefit our environment and gain traction on a sustainable future, and synthetics have their place. Both offer benefits to different scenarios, but Left Side Lawn Care’s philosophy is “the more organic base, the better.” Using organics minimize the strain of the economy; both locally and globally. Before we get into the details of how to green up your lawn organically, we wanted to give a few points on the organic philosophy and define a few terms.

The term “organic” is used in many different ways. For example, the U.S. Department of Agriculture has an organic certification program for food. In this article, we will use the term “organic” in the sense of holistic and formed without synthetic inputs.

The words “synthetic” and “chemical” are a little more straightforward. When we say synthetic or chemical, we mean man-made or formed by industrial processes. Before we dive into details on how to manage your lawn with an organic or synthetic Nitrogen source, take a moment to learn more about the differences between these two approaches to lawn care. 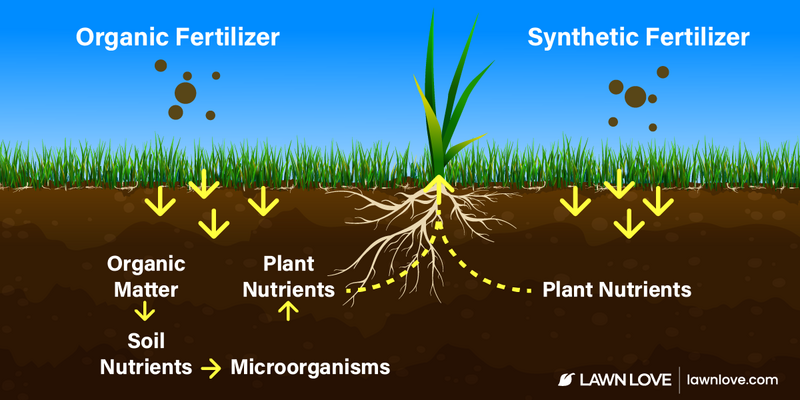 Organic and chemical fertilizers are composed of the same macronutrients – nitrogen (N), phosphorus (P), and potassium (K) but are derived from different sources.

The Haber-Bosch process is named after two German scientists — Fritz Haber and Carl Bosch — who developed a method to produce ammonia from nitrogen gas and scale the product commercially. Both scientists received the Nobel prize for their contributions. The Haber-Bosch process is credited with helping to feed the world in the 20th century and usher in the age of modern agriculture.

Critics of synthetic fertilizers point out that the ammonia (NH₃) in fertilizers can be toxic to fish and detrimental to water systems when residues run off into nearby waterways. In addition, the Haber-Bosch process relies on a large amount of energy and fossil fuels and emits large amounts of carbon dioxide, which critics say may be unsustainable long term. When utilizing a synthetic, it’s important to pick out one that has stability to it. Methylated urea (slow release) and controlled release Nitrogens are preferred since they don’t volatize so quickly and take time to break down; decreasing run-off to storm drains.

We tend to focus on what we eat and put into our bodies, don’t we? Why aren’t we doing the same when it comes to our environment? Left Side Lawn Care has taken a soil driven approach to lawn applications, and we feel it’s vital to the sustainability of future generations, to leave an everlasting imprint on our WHY. If you decide you want someone to walk with you on your lawn care journey, feel free to submit an inquiry at www.leftsidelawncare.com to see how we can help!